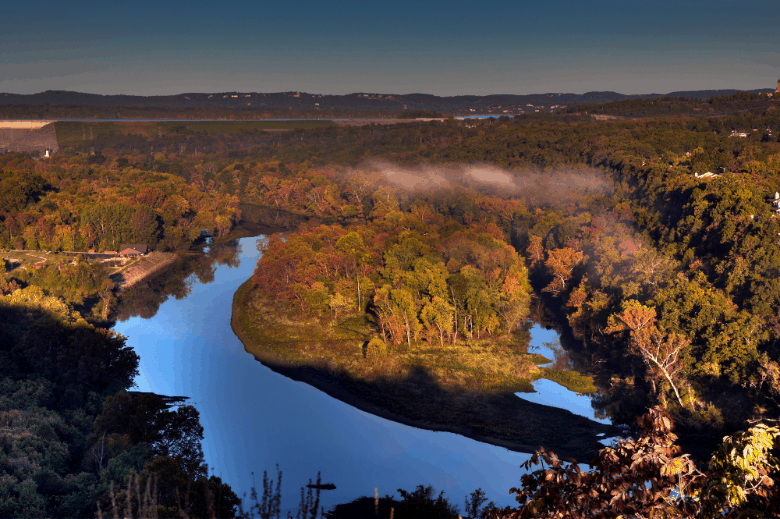 Branson is most famous for being a family-friendly version of Las Vegas with its nightly shows and ubiquitous neon lights but without all the gambling and seedier elements seen in Sin City. What many visitors to Branson don’t know is that it also has some killer kayaking locations not far from the downtown area.

Most of the kayaking near Branson is suitable for beginners and doesn’t involve any difficult water or hazards. Many paddlers will choose to bring their fishing gear along, as the slow-moving waters are fantastic places to catch a variety of game fish. Just be sure to pick up a Missouri fishing license before you do so, and you’ll also need to get a special permit on top of that if you’re fishing for trout.

As it is just steps from the “Branson Strip” you can’t miss the 23-mile-long Lake Taneycomo. Formed by the damming of the White River in the early part of the century, it was once one of the most popular vacation spots in Missouri with fantastic beaches and swimming holes. Today though, the water is much colder thanks to Table Rock Dam on its eastern end, which releases frigid water from the bottom of Table Rock Lake. Fortunately, those cold waters make it much more desirable for Rainbow and Brown Trout that thrive in the chillier waters. If you’re hoping to do some fishing during your Branson paddling trip, Lake Taneycomo is an excellent option.

Despite being a manmade reservoir, Lake Taneycomo does have a decent current, particular when Table Rock Dam is open and Table Rock Lake flows freely into Lake Taneycomo. However, any kayak built for flat-water paddling will have no trouble navigating its still rather sedate current.

There are four main boat launches running from south to north: the Hatchery Ramp near Bella Donna, The Acacia Club Ramp just south of the Branson Theater District, the Copper Creek Ramp near Point Lookout, and the Branson Landing Ramp on the eastern edge of the downtown area. Shuttles between the ramps are available from local outfitters if you’re paddling solo or don’t wish to use two vehicles.

Where to Rent a Kayak: White River Kayak and Outdoors in Hollister

Another option for a relaxing paddle not far from Branson is Table Rock Lake. Like Taneycomo, it’s an artificial reservoir formed by the damming of the White River, but it’s considerably larger as it spans over 43,000 acres. One of the best things about Table Rock is the irregularity of the shoreline, with hundreds of little coves to explore. The lake’s calm, warm waters also make this a popular spot for catching bass and catfish.

Boat ramps are located in dozens of locations around the lake, but if you’re trying to stick close to Branson, head to Table Rock State Park or Moonshine Beach on the city’s western edge. From there it’s an easy mile-long paddle to the quiet residential neighborhood on the opposite shore. Out of respect for the privacy of the area’s residents, you should avoid getting out of your boat even though Missouri permits paddlers to disembark below the high water mark.

Just about any boat would be great for paddling Table Rock Lake as there aren’t any obstacles to avoid and the current is virtually non-existent. There are a couple of campgrounds on the western shore of the lake if you’d like to make it an overnight trip. As with Lake Taneycomo, shuttles are available between the lake’s boat ramps so you won’t be required to have two vehicles available for this trip.

Where to Rent a Kayak: Kayak Branson in Branson

If you’d prefer a more free-flowing waterway, the James River near Springfield is a great choice. The river flows for eighty miles from the capital of Springfield to Table Rock Lake outside of Branson. The most popular section is about sixty miles long and can be accessed from the Turner Bridge outside Springfield with a final take out point at the Galena Y Bridge above Table Rock Lake. In between those points, there are nearly a dozen put in and take out locations at various bridges and fishing accesses, with no more than a few miles in between. There are also quite a few campgrounds located adjacent to the river if you’d like to make this a multiday adventure.

The entirety of the river is considered Class I and there are no major obstacles to watch out for. However, there’s always the possibility of downed trees and others sorts of snags that can be just as dangerous as a large rapid. Water levels also get low during the summer months though, so it’s best to paddle the James in late-winter and early spring or in autumn.

Where to Rent a Kayak: Hootentown Canoe Rental near Crane.

The most popular way to do it is to put in at Millstream Gardens and take out near the Silver Mine Recreation Area, a distance of about 2.5 miles. Four natural rapids named Big Drop, Cat’s Paw, Double Drop, and Rickety-Rack occur in that short span ranging from Class II to Class IV. From there, there’s another Class II rapid formed by an old mining dam that’s been partially breached. When the water is at its highest the dam creates a dangerous hole below it and should be portaged. From there you’ll find two smaller rapids called Little Drop and Fat Man’s Squeeze which are great for surfing. It should be noted that the rapids change drastically between high and low water periods, so it’s best to scout or ask recent paddlers about their experience there.

Where to Rent a Kayak: Running River Canoe Rental in Newton Township